ENGLEWOOD, Colo., Oct. 1, 2018 /PRNewswire/ -- Sling TV, America's number one live TV streaming service, today unveiled a new multimedia marketing campaign starring actors Megan Mullally and Nick Offerman, called "Meet the Slingers." An extension of Sling TV's "We Are Slingers" campaign that debuted in March 2018, the new national campaign spans television, digital, mobile, social and new media platforms. "Meet the Slingers" is the first ad campaign that Mullally and Offerman, known for their roles in "Will and Grace" and "Parks and Rec," have appeared in together. 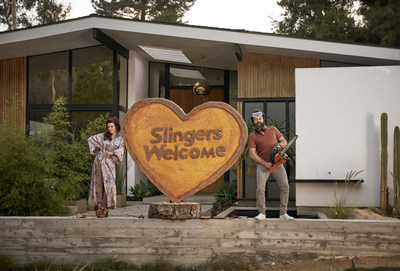 "We are excited to introduce Megan and Nick, who were already Slingers, as the new faces of the Slinging lifestyle," said Michael Ribero, brand management lead at Sling TV. "We are using the campaign to show how more people, like Nick and Megan, continue to choose Sling TV because it's the same TV you love without the bloated bundles that traditional providers force on you."

"Nick and Megan were the perfect choice to play the Sling couple. They certainly embraced the cheeky, provocative nature of the 'Slinging lifestyle,' which was refreshing in today's overly-cautious media landscape," said Sean Riley, creative director at The Martin Agency. "And who can blame them for spreading the news about being a 'Slinger?'"