Sling TV Survey Finds Almost Half of Americans Have Made Fake Excuses to Get Out of Plans
- Sling TV survey conducted by The Harris Poll finds nearly 5 in 10 Americans admit to faking an excuse to get out of plans; 76% of those chose to relax at home and watched/binged TV shows, movies instead
- Many 'excuse makers' claim feelings of guilt
- Sling TV and Maya Rudolph launch national advocacy campaign urging Americans to lighten up and lean into the 'Joy of Missing Out'

ENGLEWOOD, Colo., Aug. 22, 2019 /PRNewswire/ -- A Harris Poll commissioned by Sling TV has found that nearly 5 in 10 Americans (47%) have faked excuses to get out of plans. The online survey of over 2,000 U.S. adults aged 18 and over found that 76% of individuals engaging in this deceptive behavior wanted to relax at home and chose to watch or binge television shows, movies instead. According to the survey, faking excuses appears to be taking a toll on the emotional well-being of Americans, with 43% of excuse makers reporting feelings of guilt over their excuse making. Women, in particular, shoulder the weight of this guilt more significantly than their male counterparts (47% vs. 39%).

Sling TV has recognized this epidemic and has enlisted actress and producer Maya Rudolph to join in on a campaign intended to liberate Americans from feelings of guilt, shame and regret that come from faking excuses to skip social obligations.

"Everyone has faked an excuse at one time or another to get out of book club or a birthday party," said Rudolph. "We need to celebrate 'the joy of missing out!' JOMO is the new FOMO."

"Maya's the perfect authority to empower consumers to finally say 'no' to their plans," said Michael Ribero, general manager of Brand Marketing at Sling TV. "And, it's easy to pass on those boring obligations when you have Sling – which features the ability to customize your TV channel line-up and watch thousands of on-demand titles, all while saving hundreds of dollars per year when you switch from cable."

In Sling TV's "Joy of Slinging In" (JOSI) campaign, Maya creates fake excuses on the fly in order to escape undesirable events and instead stay home to watch Sling TV.

"With streaming services like Sling available at our fingertips, it's easy to formulate our best excuses, escape to our couches and miss out by binging away," said Ribero. "We encourage you to cancel those plans, stay home, and start Slinging."

To embrace JOSI, Sling customers can explore over 125,000 on-demand titles on Sling, in addition to popular movies featured in the "Joy of Slinging In" ribbon in the Sling TV app. For more information on the campaign, visit our newsroom, blog and follow us on Facebook, Twitter and Instagram (@Sling).

--Nearly half (47%) of Americans admit they have made up a fake excuse to get out of plans.

--The majority (76%) of those who did watched sports/TV live or watched/binged TV shows and movies while relaxing at home instead.

--58% of those who have made up a fake excuse say they delivered the news via text message and 55% delivered the excuse via phone call or voicemail.

--More than half of Americans who make fake excuses (52%) "go the extra mile" to embellish and make fake excuses seem more believable. This includes refraining from going on social media (27%), powering down mobile phones (26%) or turning off all the lights in the home (15%).

--61% of those who have made up an excuse say they typically feel relieved after giving a fake excuse, while 43% report feeling guilty.

*Survey Method: This survey was conducted online within the United States by The Harris Poll on behalf of Sling TV from July 30 - August 1, 2019 among 2,015 U.S. adults aged 18+, among whom 975 have made up a fake excuse to get out of plans. This online survey is not based on a probability sample and therefore no estimate of theoretical sampling error can be calculated. For complete survey methodology, including weighting variables and subgroup sample sizes, please contact Chrissy Tansey at christine@sling.com. 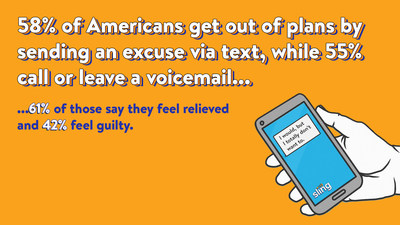