ENGLEWOOD, Colo., Feb. 7, 2020 /PRNewswire/ -- Sling TV, a leader in live TV streaming, today announced February 9, 2020 as the first-ever, official National Cut the Cord Day, to commemorate the service's fifth anniversary. In recognition of the milestone, National Cut the Cord Day is part of a five-day celebration with exclusive deals available on sling.com, February 7-11. New and returning customers can participate in the festivities by signing up for one month of Sling TV for $5.

With industry analysts estimating that up to six million people will cut the cord — canceling traditional TV subscriptions — in 20201, the streaming movement is showing no signs of slowing. However, the abundance of streaming apps with varying device compatibility, channel lineups and programming can be challenging for first-time cord-cutters to navigate.

"For the past five years, we've been dedicated to making live TV streaming simple, easy and affordable — helping Americans save $1.2 billion through cord-cutting," said Warren Schlichting, Sling TV Group President. "National Cut the Cord Day is designed to take away any excuse to cling to cable. We want to help future Slingers find out how easy it is to cut the cord, and get started on Sling TV."

Sling TV is an easy-to-set-up, easy-to-use solution for first-time cord-cutters, offering better value and more flexibility with personalized content packages. Users simply start with a base service, plus 10 hours of free Cloud DVR ($30/month), select any "Extras" they need (starting at $5 each) and within five minutes, can begin enjoying their favorite shows. For a full entertainment experience, Sling TV pairs well with on-demand content from other subscription video on-demand (SVOD) streaming services like Netflix, Disney+ and Hulu, as well as an over-the-air antenna (OTA) for free access to local broadcast channels.

"Sling TV has pioneered cord-cutting by giving customers only the channels they want and the ability to integrate local channels into the interface for free, saving hundreds of dollars from their cable bill," said Schlichting. "So while making the leap from cable to live TV streaming may feel a little daunting at first, it's easier than you think, and absolutely worth it. Not only is it incredibly easy to get the most popular channels on your favorite devices, Sling TV seamlessly integrates your free local channels for a whole-home solution, when paired with an OTA antenna and AirTV."

As part of National Cut the Cord Day, Sling TV created a Cord Cutter Hotline (1-855-553-2862) to support people who are thinking about cutting the cord, but need help determining next steps. Newcomers can call to ask questions — like how to set up the Sling TV app, what devices to use and how to watch on a mobile device — and receive the support and information they need to make a smart choice.

New and returning customers can celebrate with Sling TV by taking advantage of the following limited-time offers2:

Sling TV is also offering new customers a Cord Cutter Bundle to provide everything needed to enjoy the full integration of free locals via an OTA antenna:

The registrar at National Day Calendar® declared National Cut the Cord Day to be observed on February 9, annually, memorializing Sling TV as the first streaming service to deliver live television over-the-top (OTT), since its February 9, 2015 debut.

To reach Sling TV's Cord Cutter Hotline, dial 1-855-553-2862. For more information on National Cut the Cord Day, visit sling.com and follow @sling on Twitter and Instagram. Use #NationalCutTheCordDay to join the conversation.

2 After the first month, the service will continue at the regular price unless the customer chooses to cancel. Some restrictions apply. 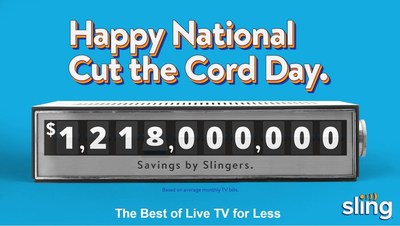